The Cello vs. the Double Bass

The two largest instruments of the string orchestra – the cello and the double bass – are too large and too heavy to be carried on a musician’s shoulder.  They rest on the floor, instead, and produce much lower pitches.

The cello and the double bass may look similar from a distance, but they are actually very different.

A cello is played while seated on a standard chair.  A double bass is played either standing up, or seated on a high stool. Bass bows come in two different varieties and are held with two different grip styles: French and German. Cello bows are typically a smaller version of the French bass bow. 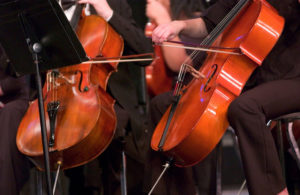 Cello in a concert

The name cello is short for violoncello, which is Italian for “small double bass.”

While the cello is too big to be placed under the player’s jaw like a violin or viola, it is also too small to play while standing up. It is the only instrument that absolutely must be played sitting down.

This instrument is the tenor voice in the orchestra. Its four strings are tuned to the pitches C, G, D, A – exactly one octave below each of the four open strings on the viola. Most cello music will be written in the bass clef, but occasionally moves into tenor clef as the music gets higher. When the music gets very high, the treble clef is used.

The cello has a much deeper and richer tone than both the violin and the viola, due to its larger size and thicker strings. The cello is the second-largest instrument in the string orchestra. It is also the one that sounds the most like a tenor voice.

The cello’s lower strings have a rich, dark sound. It is quite common for composers often write a particular phrase to be played on a certain string, in order to take advantage of this sound.

A large symphony orchestra can have between eight and twelve cellos in a section. Smaller ensembles, of course, have fewer and it’s entirely possible for a small chamber orchestra to get by with just one or two cellists.

How to Hold the Cello 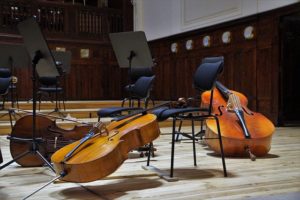 At over 6 feet long, the double bass is the biggest member of the string family. This instrument is so big that one has to stand up or sit on a very tall stool to play it – having long arms and big hands comes in handy, too!

Like the cello, the body of the double bass rests on the floor, supported by a metal endpin, and the neck of the instrument is aligned with the player’s left shoulder.  Its sound is produced the same way as the sound on a cello, using the left hand to change pitches and the right hand to move the bow or pluck the string.

The strings on the double bass, however, are much longer than those on a cello. This extra length allows this instrument to play very low notes.  Unlike the other three instruments of the string family, the strings on a double bass are only the interval of a perfect 4th apart from one another: E, A, D, and G (the low E is lower than the cello’s C). In comparison, the cello has a much wider range. The cello can play notes spanning about five octaves, while the bass can play only around four.

The size (and shape) of double bass bodies is not as standardized as that of the cello – so string length can vary between individual instruments. Double basses typically have a lot more variation in their body shape and proportions than cellos. The volume of the cello body is well suited for its tonal range. As a result its shape could be perfected over centuries of time. In contrast, the body of the double bass is actually too small for its range.  Making it large enough to suit its very low range would make it too large for any person to play. As a result, bass makers have adjusted the sizes of these instruments to balance tone with practicality.

How to Hold the Double Bass

Bass players use two different types of bows: the French bow and the German bow.

Both bows have their advantages. Consult your bass teacher or a fellow bass player for assistance if you’re unsure which bow to use.

This author hasn't written their bio yet.
all_shore has contributed 8 entries to our website, so far.View entries by all_shore 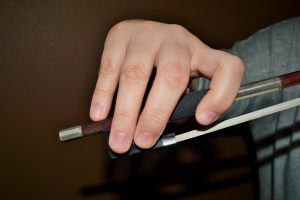 Introduction to the Right Hand

The right hand holds the bow, which is manipulated across[...]

Congratulations to all of our All Shore Orchestra participants for[...] 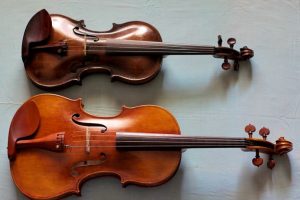 The Violin vs. the Viola

The two higher-pitched instruments of a string orchestra – the[...]

Send us an email and we'll get back to you, asap.